Metaphysical Definitions and Principles of Hyponoetics

Hyponoetics is a new philosophy of Mind and Matter. Here are the most important principles in a nutshell 1: 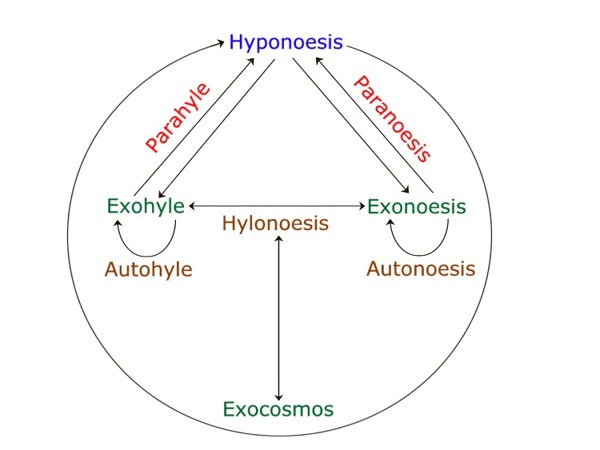 From Greek ὑπο (hypo = under, below, beneath) and νόησις (noesis = intelligence, understanding, mind, processes of thought). The basic unitary reality or entity underlying and being the source of a plurality of distinct, transient and individual forms, such as those of our physical and mental world. Also referred to metaphorically as the collective, universal or cosmic Mind, the One Mind, the World-Mind.

From Greek ἐκ, ἐξ (ex = out, away, off, from, from out of) and νόησις (noesis = intelligence, understanding, mind, processes of thought). The distinct, transient and individual mental form or entity that is a manifestation, actualization and objectivization of Hyponoesis. Synonym: Individual Mind.

From Greek ἐκ, ἐξ (ex = out, away, off, from, from out of) and ὑλη (hyle = stuff of which things are made, material, matter). The distinct, transient and individual physical form or entity that is a manifestation, actualization and objectivization of Hyponoesis. Also referred to as the substance of matter as objectified in the exterior physical world we experience.

From Greek παρά (past, beyond) and νόησις (noesis = intelligence, understanding, mind, processes of thought). The supreme latent faculty of the Individual Mind (Pure Mind), capable of accessing and processing any conceivable information in Hyponoesis (Paranoetic Knowledge/Information). Paranoesis or Transrational Thinking transcends the limitations of rational thinking and leads to yet unknown possibilities and powers resident within our mind. Paranoesis reunites the Individual Mind with the Universal Mind.
(Synonyms: Transrational Thinking, Transrational Mind)

From Greek άυτός (by or in itself, self) and ὑλη (hyle = stuff of which things are made, material, matter). The dynamically self-organized matter-energy (Exohyle) represented as higher-order entities (such as organisms). Autohyle is indicative of what we call Life and what the ancient Greek philosophers meant by the concept of "Psyche". Top

From Greek άυτός (by or in itself, self) and νόησις (noesis = intelligence, understanding, mind, processes of thought). The introspective or self-reflective faculty of the Individual Mind (Exonoesis), also called self-consciousness, self-awareness or self-knowledge. There is a rational and emotional aspect within Autonoesis. The rational aspect represents what is commonly called intellect or rational faculty, cognition or just plain thinking. The emotional aspect represents what is known as feeling, soul or psyche in the modern sense of the term.

From Greek ὑλη (hyle = stuff of which things are made, material, matter) and νόησις (noesis = intelligence, understanding, mind, processes of thought). The product of the symbiotic and synergetic relationship between Exohyle (Matter) and Exonoesis (Mind), what is commonly called consciousness.

From Greek παρά (past, beyond) and ὑλη (hyle = stuff of which things are made, material, matter). There are two kinds of matter-energy: a) Exohyle and Autohyle as representing the visible world we perceive and experience and b) Parahyle, which reunites Exohyle with Hyponoesis. Parahyle is the pure energy-field or the quantum physical vacuum that is the source of all physical manifestations.

From Greek ἐκ, ἐξ (ex = out, away, off, from, from out of) and κόσμος (kosmos = order, universe, world, totality). It represents the universe, our world, or Nature in general. In a wider sense it refers to the whole reality.

Hyponoesis (Universal Mind), as absolute unity, manifests itself in a plurality of Individual Minds (Exonoesis). This process of formation or creating "forms", such as body-mind entities, constitutes the world as we know it. Matter is an actualized in the same process of formation, although it depends for its existence on the Individual Mind that sustains the phenomenal world.
In the second phase, Exonoesis (Individual Mind) expands its intrinsic limitations and its attachment to nature, i.e. the body and develops new intelligible forms and faculties, such as reason and logical thought, which lead to culture, arts and science and in its ultimate and supreme stage to philosophical or transratinal thought. Paranoesis (Transrational Thinking) reconnects the Individual Mind with the Universal Mind.
Finally, in third stage of the dialectical process, the Transrational Mind (Paranoesis) becomes again Hyponoesis (Universal Mind). It dissolves the plurality of forms, the physical and mental world of objects, and becomes one in the Absolute and Undifferentiated Mind.

From Greek όλος (holos = whole, entire, complete) and γέμω (gemo =to be full, contain, embrace, hold together). The holistic structure or pattern of the thought process (see essay Hologemes ).

Mind (Exonoesis) and Matter (Exohyle) are aspects or attributes of an underlying and fundamental reality (Hyponoesis). The problem of identity of each aspect is resolved in the fact that both are dependent on Hyponoesis for their existence and essence.
The Multi-Aspect Theory claims that the world consists of different aspects, such as physical and mental aspects, which are all derived from the same, underlying reality. In contrast to the double-aspect theory or property dualism, the Multi-Aspect Theory does not restrain the number of aspects. We human beings may know only a limited number of aspects, but there can be, potentially, an infinite number of aspects (cf. Spinoza's attributes).

The fundamental reality, called Hyponoesis, manifests itself in a variety of differentiated aspects, which I call Noetic Representational Entities, short Noemes. A Noeme can be manifested as a physical entity, such as our world consists of, or a mental entity, such as consciousness. Noemes are not exclusively physical or mental, but always consist of different noetic representational entities. There is however a certain primacy of a particular Noeme, which renders a special configuration or organization of Noemes the idiosyncratic structure that makes it a unique individual entity.
(see Essay Hyponoesis and Noemes )

The Theory of Generative Thinking postulates that our Individual Mind produces subjective and objective concepts which constitute both our mental and physical world. We know the world only through our Individual Mind (Exonoesis) and therefore co-participate in establishing the reality we experience. Collective generative thinking produces a world that is real only for those who are committed to that collective belief-system. (see Essay Generative Mind )

Noetic patterns are idiosyncratic features or properties that make up the unique constitution of an Individual Mind (Exonoesis). Hyponoesis (Universal Mind) manifests itself as an infinite variety of noetic patterns. A coherent set of noetic patterns constitutes a specific individual (mental or physical) form (Exonoesis, Exohyle).
(see Essay Noetic Patterns of Exonoesis )

By assuming Hyponoesis to be the basic reality, all problems concerning irreconcilable theories and views are resolved, since every view has its foundation in thinking or in our Individual Mind. Thought is the common ground of all views and therefore they can by synthesized or unified in the higher union of Hyponoesis (Universal Mind).

The processes and structures of Thought or Mind cannot be studied under the aspect of divisibility or reductionism. Thought or Mind is a complex and indivisible whole or entity that embraces all conscious and unconscious activities, such as thinking, feeling, perception, sensation, dream, imagination, volition, intention, behavior, etc.

Our Individual Mind (Exonoesis) is not a product or epiphenomenon of the biological evolution, such as a physical organism (as the brain) is. The Individual Mind is actualized through the potentiality and capacities of the body-brain-organism. Since the manifestation of the Mind's faculties depend on the complexity of the brain, and as such on the evolutionary state the brain has accomplished, the illusion of a gradual development of consciousness occurs. Hyponoesis manifests itself as an individual form, Exonoesis, a form that actualized out of the potentiality of Hyponoesis and that integrates itself into the physical structures.

In my theory of Hyponoesis, individuation is a similar process as described by traditional philosophy (see Glossary), except that the individuating agency is Hyponoesis that manifests itself as Individual Minds (Exonoesis). This process of concretization or concrescence (to use Whiteheadian terms) must be resolved again in order to come to true and holistic understanding (transrational apprehension). As long as our mind remains within the inherent limitations of its individuality, we will not be able to grasp concepts and ideas that transcend individuality. Only be de-individuating our own mind, by transgressing the restraining individuality of our mind, is it possible for us to gain the original unity of the Universal Mind (Hyponoesis) and from this point of view to understand transrationally the whole and its interactions. Deindividuation is not a process of denying or repudiating one's individuality, but of transcending it in thought. We are and remain individuals as long as we exist as these individual mind-body entities. Being an individual mind-body entity does not mean we are condemned to a life-long imprisonment. Every Individual Mind contains latently the power to regain its original unity with the Universal Mind. Since Individual Minds are only manifestations of the Universal Mind, we are potentially the Universal Mind itself. The actualization of our Universal Beingness consists in the process of deindividuation.

Thought as an evolutionary instrument of survival and adaptation to the environment develops primarily utilitaristic and habituative patterns that dominate the life of most people. To break the spell of habituation, thinking has to transcend its natural structure and become what is commonly called "creative" thinking (also: cultural thinking, aesthetic thinking, philosophical thinking, scientific thinking).

The type of information that can be accessed by common thought is predominantly and at most everything that is acquired through perceptions and experience and at least what can be recalled from memory (personal legacy). There is, however, information available that is not locally stored in the brain, but resident in the "universal memory" of Hyponoesis. This information percolates through unconsciously in telepathic and precognitive events or intuitions, and consciously in Paranoesis, i.e. Transrational Thinking (universal legacy). (cf. C.G.Jung's personal and collective psyche).

Noemata are the objects of thought, that is, actual information. A-noemata represent potential structures that become manifested as Noemata or actual information either through conceptual thinking or Transrational Thinking. Anoemata is potential, undefined or latent information, not yet actualized by an operative process of our Mind. (see Essay Paranoetic Information Semantics )

Unity of subject and object

No artificial distinction between a subject of thought and an object of thought. No transcendental ego. Thinking and the person who thinks and the object thought about is one and the same within the process of thought. Any differentiation is purely conceptual and is of practical use for our daily life. That's why we perceive the world as an object outside of us.

There is a direct and personal impact on one's life, psyche, attitude, behavior, etc. The way I think affects the way I view the world and the people around me and how I treat other people. This is called the dispositional efficacy.
There is also an indirect and universal or collective impact on the whole world, the cosmos, nature, society, etc. Since my thought is interrelated with the underlying reality of Hyponoesis, every single thought has an indirect effect on everything else (interpenetration). This is called the collective or integrative efficacy.

1: The above terms that are derived from Ancient Greek were coined by the author of Hyponoetics and are only to be used in accordance with prevailing copyright laws.